Annabelle Gauberti, founding partner of London law firm Crefovi, delivers her Crefovi Christmas newsletter and wishes, as well as what to look out for in 2017. 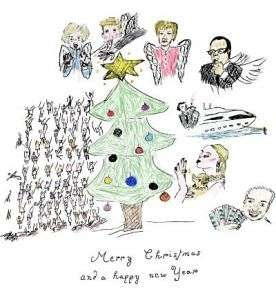 2016 was a tough year for the creative industries: a lot of music performers bid their farewell to the world and I really do hope that they are now in heaven, especially Leonard Cohen, David Bowie and George Michael.

It was also a highly divisive year, with several high-stakes democratically-taken decisions which left the “loosers” deeply aggravated by the majority’s votes mostly based on “post truths”, downright lies, emotions, feelings and an unprecedented level of resentment. Is this the most efficient, rational and successful way to appoint a leader and build a road to economic recovery? I certainly do not think so.

2017 is going to be the year of isolationism as geo-political fractures will grow wider, while demagogy should be reaching its peak in the USA and the UK. Meanwhile, the Eurozone will attempt to keep a semblance of unity, as three major election cycles are going to take place in Germany, France and the Netherlands and will probably bring their respective right and far right parties back to power, while ruthless negotiations on Brexit with the UK are going to create many tensions.

Sadly, it is unlikely that the member-states of the European Union, and in particular of the Eurozone, will muster the courage to take appropriate political and tax reforms in 2017, in order to boost EU growth, and provide the ECB with all the tools that a central bank needs to have at its disposal. While Germany will keep on displaying a shining trade surplus, borrowing on international capital markets at a 1 to 2% rate, such as France, Mediterranean Eurozone countries such as Greece, Italy and Spain will sink under the weight of their debt repayments and having to borrow on international capital markets at no less than a 5% rate.

What does this all mean for us, mere citizens of the world?

Well, if you have a business, a job in a high growth industrial sector (I am thinking services here), many clients who are based overseas, and/or a large portfolio of securities investments, 2017 is going to be a good year for you. Wall Street likes Trump and his promises of deregulation, the City likes the Tories and economists predict that the USA’s and UK’s GDP growth rates will be at 3% plus and 2% plus respectively next year.

If you do not have the means to enjoy the ride, because you are unemployed, employed in a low growth industrial sector (I am thinking manufacturing here), a refugee, a member of the working class or lower middle class, and/or a citizen of the Eurozone, well, brace yourself for a tough year ahead. It does not look bright and shiny, out there. Just watch Ken Loach’s last gem, “I, Daniel Blake”, and you will measure how the most vulnerable members of our “first world” societies are being squeezed, neutralised and downright eliminated by our ruling “intelligentsia”.

I predict that the very people who voted for Trump and Brexit are going to bear the brunt of the negative impact of such decisions, due to rising prices of food products and other basic commodities such as electricity and gas, and lower investments in public transports, public amenities and the public good in general.

The Eurozone will stay in a state of economic slump, like it has been for the last 6 to 7 years now, with no strong political figure pushing for essential economic, political and tax reforms which are, nonetheless, absolutely critical for the Eurozone project to live on and finally become successful.

Consequently, in view of all the above, there is going to be an ever increasing divide between the “haves” and the “have-nots”, while social tensions, riots and wars will be on the rise, globally.

It’s not going to be a good time to flash one’s wealth and status, out there, if you do not want to end up being robbed, burglarized or, simply, vilified for daring to differentiate yourself from the wolf pack.

The luxury and fashion sectors will suffer, as a result, as less and less members of the elite and middle classes are willing to purchase and display exterior signs of wealth.

The entertainment sector will continue to thrive, in 2017, with more and more consumers attracted by easier and cheaper access to, as well as diversified distribution channels of, video and audio content online, which they can consume at their leisure.

With a rising portion of a young, multi-racial and low-skilled pool of “first world” citizens permanently unemployed or disabled, the democratisation of the entertainment and gaming sectors has the additional benefit of providing “something to do” to these people, on a daily basis.

I am sorry that my Christmassy newsletter is not more upbeat and positive but, unlike Trump and the Tories, I value truth and rationalism above all things (with measured empathy and feelings added to the mix!).

Above all, we should all individually strive to keep and improve our humanity in 2017, as well as work endlessly towards preserving our Earth’s assets, growing them, nurturing them and eliminating most immediate and serious threats to Earth’s and its inhabitants’ survival and wellbeing.

With very best wishes for the holiday season and the new year ahead.