As I have been doing since its inception, I attended the 2014 Vogue Festival last weekend, on the Southbank. While this event is attractive to the aspiring thousands who dream of ‟breaking into” the fashion and luxury arenas, I think that the content of such festival is still very superficial and biased to make the fashion and luxury sectors look like La La Land. 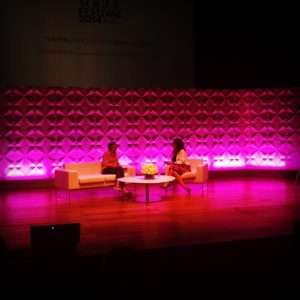 1. Why were Vogue interviewers avoiding all the hard questions?

These three high-profile individuals were interviewed by Vogue’s fashion director, Lucinda Chambers, in about 45 minutes.

At no point during that interview were some important questions asked about legacy and passing on the torch to the next generations, to continue the so-called ‟fashion life”.

For example, fashion dynasty Missoni suffered several blows, in the last year or so, when Vittorio Missoni, Missoni’s chief executive officer and son of the two founders, Rosita and Ottavio, died in a plane crash in January 2013. Patriarch Ottavio Missoni, the brains behind the Missoni brand, passed away in May 2013. I was therefore expecting Ms Chambers to ask, in a considerate and respectful manner of course, during her interview with creative director Angela Missoni, how the Missoni brand was restructuring itself, having lost two of its most important business minds in the span of six months last year.

Absolutely nothing of the sort was mentioned, Ms Chambers and Ms Missoni surfing on the surface of what it was like working with your mother Rosita and your daughter Margherita (none of whom occupy business and management roles in the Italian company) during the whole interview. The creative side of Missoni is amply covered, with Angela, Rosita and Margherita Missoni all having some creative roles in the business. What is missing, in this brand and fashion business, is an apt and astute manager with a vision to grow and fortify the Missoni business around the world.

How come such critical weakness of the Missoni brand was brushed aside by Vogue? Another example of this avoidance to ask real and purposeful questions is illustrated with Ms Chambers’ interactions with Manolo Blahnik. I understand that this man was born in 1942, so he is 72 years old (way older than my father!). He manages his business with his sister, Evangelina Hulsebus-Blahnik and his niece, Kristina Blahnik.

As Mr Blahnik confirmed during the interview last Saturday, he abhors working with teams and works alone without assistants or apprentices. He is therefore solely responsible for the design of every one of the thousands of shoes that bear his name.

This is great and very impressive, but what will happen when Manolo Blahnik decides to stop being involved in the business or dies? Does he, his sister and his niece have some succession plans in place, to organise that transition to another era of the Manolo Blahnik’s brand and to continue ‟the fashion life”?

Again, absolutely nothing was mentioned by Lucinda Chambers on the subject, as she played it very safe and preferred to have some sort of monologues exchanged between Mr Blahnik and herself, during her whole interview.

As a journalist, is it not your role to discover the truth or, at the very least, look for it?

Instead of asking vacant questions about the banana plantations that Ms Blahnik’s mother used to have in the Canary island city of Santa Cruz de la Palma (!), wouldn’t it have been more meaningful for Ms Chambers to prompt her interviewees on real key issues and challenges relating to their ‟fashion life” and its continuation?

I really felt, during the 2014 Vogue Festival, that it was down to the members of the audience (i.e. all of us), to raise the bar, at the end of each interview conducted by either Ms Chambers or Vogue’s editor Alexandra Shulman, and finally get to hear answers to all the questions that were burning the tips of our tongues!

2. Why portray the fashion and luxury sectors as La La Land, at the 2014 Vogue Festival? 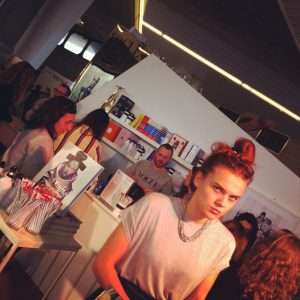 Between the make-up booths and pop-up hair-styling salons, I felt sorry that such misrepresentation of the business of fashion and luxury was made, at the 2014 Vogue Festival.

I don’t like it when this fiercely competitive and unforgiving industry is portrayed as a garden covered with roses and populated by angelic minions because it is not real, it is only the dream of what fashion and luxury should be like.

By exploiting these distorted views and high expectations of the members of the public attending the festival, Vogue’s organisers are merely cashing in on all the hopes and illusions that all of these young bright things attending last week’s events and sessions have.

The 2014 Vogue Festival does not show you what happens behind the curtains, on “the other side” of what the public sees. Of course, fashion and luxury are creative industries with similarities with the entertainment world and the art world, where everything is show business.

But, hey, fashion and luxury is, at its core, a business, in which, like in all industries, the ultimate goal and bottom line are to sell at very high margins, generate highly profitable revenues and get rich and famous in the process.

Those in the fashion and luxury sectors who have forgotten this agenda have paid the price dearly: think John Galliano, think L’Wren Scott, think Alexander McQueen.

Do you really want to get real and know what it’s like, to work and become a success in the fashion and luxury goods’ sectors?

Read the novel ‟The devil wears Prada”, read the Financial Times, read some of the articles in BoF, enrol in one of the master or MBA courses in luxury management (where I teach students the law of luxury goods), do some internships in fashion and luxury houses to get ‟down-to-earth” experience.

Yes, everyone wants to work in fashion, as powerful fashion magazine editor Miranda Priestly points out to newcomer puppy Andrea Sachs in ‟The devil wears Prada”. But, out of the mass of candidates and hopefuls, how many will actually really make it? I think 1 percent, max.

It’s sad, isn’t it? It’s even more competitive than becoming a successful banker or lawyer, despite the rampant message that “everyone can make it” in this sector, and ‟everyone can have access to it”.

Underneath the surface, and from my experience as a lawyer who has practiced for clients in the fashion and luxury sectors for over 10 years, I can guarantee that those who are going to successfully climb the top of the fashion and luxury pyramid will be the most resilient, toughest, hardest working, most dedicated and smartest individuals of the crop.

Don’t fool yourselves, boys and girls attending the 2014 Vogue festival last weekend, fashion and luxury is a ferocious industry, where only the fittest and toughest will succeed.

3. So what can you do, to get unbiased and real information on the fashion and luxury sectors?

I have the solution for you!

Attend our upcoming first seminar on the law of luxury goods and fashion series, to be hosted in central London, on Tuesday 22 July 2014.

Speakers at this event will all be top managers and business professionals with decades of experience in the fashion and luxury sectors, who will at last explain the commercial, financial and legal strategies underpinning the success of some of the most ‟en vogue” fashion and luxury maisons.

The first seminar is entitled ‟How to market fashion and luxury products through celebrities?” and it promises to be a hit with all those of you who want to really understand what it’s like, to work in the fashion and luxury sectors.

Annabelle Gauberti, founding partner of the London fashion and luxury law firm Crefovi and president of the international association of lawyers of the creative industries (ialci).