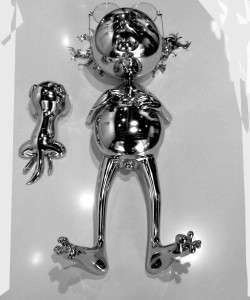 I came across an interesting piece, on Phaidon’s website, recently, entitled ‟How the art market became a luxury goods business”.  This blog post describes the reactions to, and contains an interview about, artist Andrea Fraser’s essay entitled ‟L’1 pour cent c’est moi”, freely available to download from the Whitney Museum’s website as part of its 2012 Biennial.

In her essay, the California-based artist and professor at UCLA stresses her concerns that today, art is not only an asset class for the financial elite, but has also become a financial instrument. She also states that, the greater the discrepancy between the rich and the poor, the higher prices in the art market rise. According to Ms Fraser, while there is a direct link – quantified in recent economic research [1] – between the art market boom and economic inequality that has reached levels not seen since the ‘20s in the US and the ‘40s in Britain, it is not just the art market that has expanded from this unprecedented concentration of wealth but museums, art prizes, residences, art schools, art magazines have multiplied in the past decade.  She expresses her uneasiness at working in the art field, which has benefited from, and, as an artist, having personally benefited so directed from, the anti-union, anti-tax, anti-regulation, anti-public sector politics that have made this concentration of wealth possible. Andrea Fraser concludes her essay by saying that ‟a broad-based shift in art discourse can help bring about a long overdue splitting off of the market-dominated sub-field of galleries, auction-houses and art fairs. Let this sub-field become the luxury goods business it already basically is, with what circulates there having as little to do with art as yachts, jets and watches. European museums have the potential to be the birthplace of a new art field that could emerge from this split, where new forms of autonomy can develop”.

It is not the first time that an artist has expressed concern, resentment and even cynicism at having to play the game of capitalism and conform to harsh business realities.

Sarah Thornton, in her book ‟Seven days in the art world” [2], cheekily describes her conversation with Marc Jacobs, artistic director of Louis Vuitton Malletier, to whom she says that she heard that artist Takashi Murakami referred to his Louis Vuitton work [3] as ‟my urinal”. After taking an audible puff on his cigarette, Marc Jacobs, who deeply understands the art world – he collects, attends the auctions, visits the Venice biennale -, replied coolly ‟I’m a big fan of Marcel Duchamp and his ready-mades. Changing the context of an object is, in and of itself, art. It sounds like a put-down, but it’s not”. As Ms Thornton notes, ‟given that Duchamp’s ‟urinal” is one of the most influential works of the twentieth century, one might argue that Murakami is in fact glorifying his LV affiliations”. However, one can only wonder how this play on words might be interpreted, coming from an artist.

To further expand on this point, it is worth noting that some street artists have a radical take on the luxury goods business, trying to differentiate themselves as much as possible from this industrial sector. For example, French street artist Zevs made many works of art parodying logos of famous luxury brands, such as Chanel, Louis Vuitton and Ralph Lauren, criticizing the role these brands play in society. Since these street art works may damage and dilute the image of luxury houses, Louis Vuitton and Ralph Lauren, among others, have put in place some robust anti-copying and anti-counterfeiting teams, who do not hesitate to threaten litigation if artists do not stop using their protected trademarks in artworks [4]. The paradox is that, the more street art boldly criticises and parodies the luxury goods business and consumerism, the more expensive it becomes on art markets, fetching ever increasing prices at auctions, just like any other luxury good!

It is true that there is a correlation between the fine arts and luxury goods sectors, as buyers of the former are often buyers of the latter. To give clues about their status and wealth, high net worth individuals (‟HNWIs”) tend, in general, to surround themselves with luxury goods and art works. With a rising trend of HNWIs becoming more numerous, especially in emerging economies such as China, Brazil and India, the demand for luxury goods and art works is bound to increase. ‟In Asia, Russia and the Middle-East, the purchase of artworks has acquired enormous cultural, economic and lifestyle importance. The decade’s new millionaires, hopping from art fairs to auction sales the world over, have transformed the auction market into an increasingly high-end market” [5]. As one of the most important economic features of the art market is that it is essentially supply-driven (i.e. there is a limited amount of high-quality fine arts pieces available on this market), increased demand cannot necessarily increase supply, and instead elevates prices of art works [6]. As a result, only either the 1 percent (or, most likely, 0.1 percent), mentioned by artist Andrea Fraser in her essay, or corporate art collectors, can afford buying works of fine arts.

Indeed, companies play an essential role in the current art world, as corporate collectors, patrons, charity-event organisers, supporters of art exhibitions and collaborators with artists. Luxury houses, in particular, are very attracted to the art world and, despite the ‟disdain” shown by certain artists towards commercial endeavours and the luxury goods sector in general, actively get involved on artistic projects. At the forefront of this movement, Louis Vuitton has even recently published a book, entitled ‟Louis Vuitton: Art, Fashion and Architecture”, to publicise its many collaborations with artists. From the Louis Vuitton Foundation, expected to open in 2014 at the zoological gardens in Neuilly, in the outskirts of Paris, to the many fashion collaborations with artists Takashi Murakami, Olafur Eliasson, Richard Prince and, more recently, Yayoi Kusama and Daniel Buren, Louis Vuitton is the all-time winner of art accolades, even having set up an access and arts education programme for disadvantaged children in partnership with five London museums [7].

Other important corporate collectors are François Pinault, the founder of luxury goods conglomerate Kering (ex PPR), who has created a contemporary art foundation at the Palazzo Grazzi and La Punta della Dogana in Venice and who is the owner of the world’s largest auction house Christie’s; and jewellery house Cartier and its highly original contemporary art foundation. In the words of luxury marketing specialists M Chevalier and G Mazzavolo [8], ‟an art collaboration will attract the attention of the press and the public, invigorating the brand’s creativity, giving the brand a renewed pertinence since it will become associated to celebrities of the contemporary art world, giving it the proof of aesthetic sensibility of the brand”.

It all makes sense from a business standpoint anyway, since, according to luxury strategists JN Kapferer and V Bastien, ‟luxury is the artist’s means of financial subsistence. Working for the luxury industry allows an artist to live decently while pursuing his or her artistic work” [9].  In addition, corporate collectors and patrons can benefit from substantial tax advantages when putting money in fine arts: both the US and France grant hefty tax relief to companies that buy works of art to constitute corporate art collections. Another Gallic example is the tax cuts granted to French companies that make donations to public bodies, which main activity is to organise contemporary art fairs for the public [10].

In the United Kingdom, the government has recognised the importance of providing reductions in corporate tax, capital gain tax and income tax, in exchange for donations of qualifying gifts of pre-eminent property to be held for the benefit of the public or nation. A new scheme entitled ‟gifts of pre-eminent objects and works of art to the nation” was introduced in April 2012, in order to boost philanthropy by living individuals and corporations, all of whom are tax residents in Great Britain.

To conclude, I agree that the art market has become a luxury goods business, controlled by the economics rules of supply and demand. If some artists are unhappy with this state of affairs, I think that it is down to them to control the “demand” chain for their art works. If they do not want to sell their art pieces above a certain price and/or to certain types of buyers, they should make it clear when dealing with art gallery owners and other distributors of their work. Artists could even directly approach the types of buyers they want to sell or donate their work to, such as museums, art foundations or non-profit organisations, obtaining written warranties, covenants and undertakings from these ‟selected” buyers that they will not put the art works in the secondary market (in particular, at auctions). As the demand side for contemporary art works is ever increasing, inflated by the cohorts of HNWIs who seek highly visible labels and for whom buying from an internationally renowned gallery is similar to buying from Louis Vuitton, Prada or Chanel, artists need to have a well-thought business plan, in which they lay out their plans to reach financial success as well as recognition from the art world, while holding true to their ethical beliefs.